Our team is well equipped with brushcutter, chainsaws, woodchippers, a pedestrian flail mower and a skid steer mounted height adjustable slasher mower. We are happy to undertake single projects as well as longer term maintenance contracts. Please get in touch.

When establishing or maintaining a wildflower meadow or species rich grassland it is important to cut the plants and remove the cuttings.

Late Summer into Autumn is the best time to do this. After the plants have shed their seed. Not only does this tidy up the area for winter but it stops that years growth from overpowering any newly emerging plants in a layer of rotting plant material. 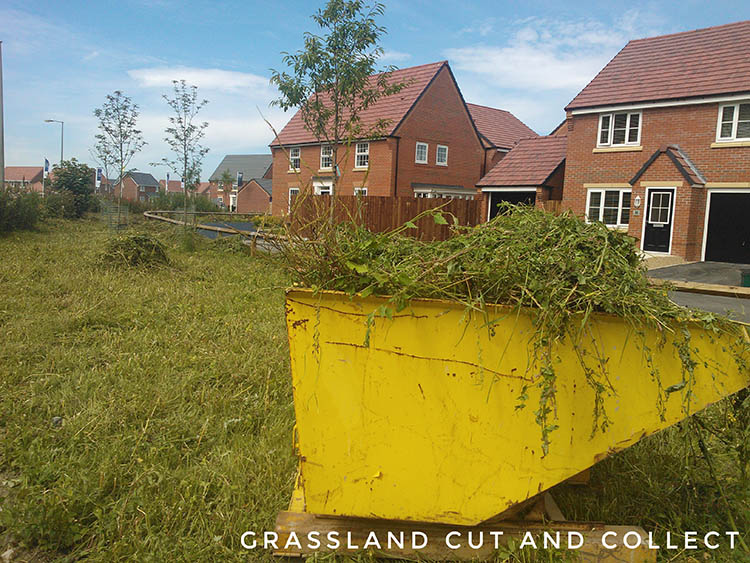 Meadows can be cut by strimming and raking or using a mower and collecting the cuttings. Cutting the plants back to 25mm to 50mm in length is an important part of their life cycle. Its minimises grass dominance and ensures that re-growth and species diversity will continue year on year.

Our conservation operatives are qualified to use machinery of all sizes, from brushcutters to tractors. So we can offer our expertise on projects of varying requirements.

All our team are trained in ecology and protected species, to make sure we offer the best in ecological contracting. If your site has sensitive ecology present such as great crested newts or reptiles we can undertake cut and collect as a staged process. We will start with a high strim at 150mm, to encourage sheltering animals to move out of the cut area but avoid injury. Then we will return after at least 24 hours to complete the works with a low strim to 50mm or thatch level, whatever you require.

Bramble is a great plant, in the right area. Bramble and scrub provide predator cover, nesting opportunity, height and structure and are a great food source for many species. However they can quickly dominate an area an reduce diversity of other floral interest.

Whatever the reason for reducing or controlling bramble or scrub, Contract Ecology Ltd can help. 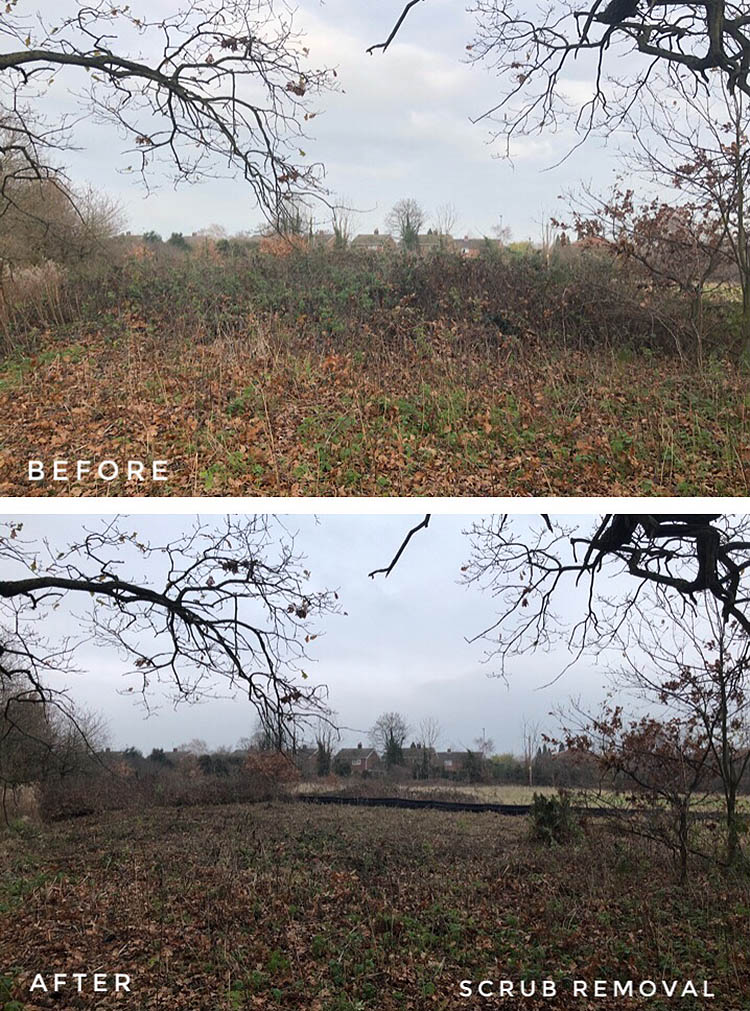 Our height adjustable slasher mower is great for mulching large stands of bramble, quickly. The adjustable height means we can accommodate sensitive ground features and sheltering fauna, factoring that even outside of nesting bird season other ecological constraints may need to be addressed such as hibernating reptiles or hedgehogs for example.

Where protected species are identified, or for smaller patches of bramble removal, we will fit a dedicated shredder blade to our high powered brushcutters. This allows us to mulch even the most dense of bramble stands with great accuracy.

Contract Ecology’s conservation operatives offer a range of management prescriptions for Himalayan balsam control. Our trained ecologists can identify and map the plants spread across your site if this hasn’t been done already. For Himalayan balsam control on sensitive sites we recommended traditional hand pulling. For more demanding growths our NPTC certified operatives can strim and/or chemical treat the infestation.

Himalayan balsam is a shallow rooted plant and is therefore quite easy to pull out of the ground.

To effectively control the plants via this method, it is important to start hand pulling operations early in the growing season (April). The number of conservation operatives required and duration to complete this procedure will depend on the extent of the infestation. We recommend you contact us and we will arrange a site visit to best advise this. 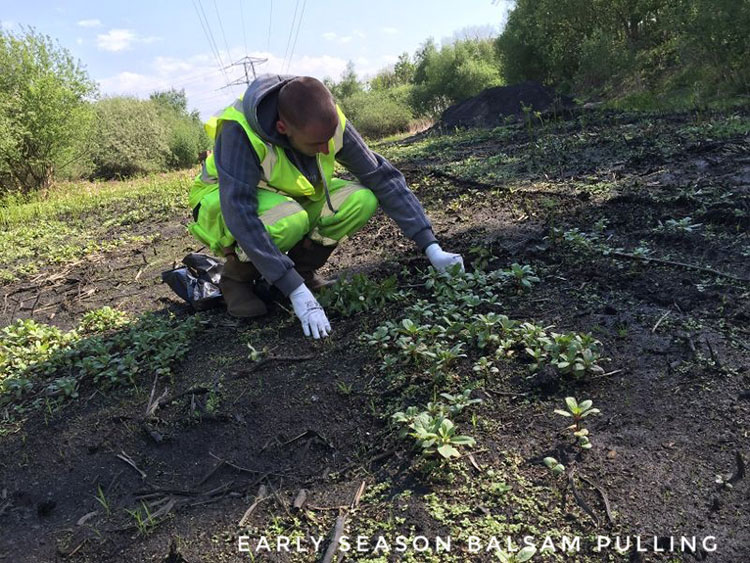 We will identify a suitable control area where we can deposit the pulled plants. This is important as Himalayan balsam is still capable of actively growing even after hand pulling. It is important that experienced operatives like Contract Ecology Ltd are used for Himalayan balsam control. The plant must be crushed to prevent it re-rooting or continuing to set seed, even once pulled. There is no need to dispose off site, saving you greatly on landfill costs.

Our operatives will undertake hand pulling of the balsam on a rotational basis, with each control area visited at least twice during growing season (April to June) and before seed pods are ripe. Hand pulling should not be undertaken once the seed pods have developed and have ripened due to risk of spreading the seed.

Himalayan Balsam can be controlled by spraying the infestation with herbicide. Glyphosate based products are best for chemical control. Our conservation operatives hold NPTC certification for this process.

Timing is critical when controlling Himalayan balsam. The infestation should be sprayed early in the growing season, ideally before the plant has flowered but has developed enough to ensure adequate and even application of the glyphosate. A secondary application is recommended to ensure effective termination of late germinating plants.

In all instances on chemical treatment, Himalayan balsam should be sprayed before the seed pods are ripe, to prevent spread of the seed whilst the operative moves through the infestation.

If your balsam is close to, or adjacent to a watercourse, the work will require consent to use chemical controls. We are happy to obtain all the necessary consents from the Environment Agency on your behalf as part of our service.

Contract Ecology Ltd is a conservation led contractor and we appreciate that there will be sites and clients with an objective to avoid chemical treatment wherever possible. In this instance, we recommended Himalayan balsam control using mowing and strimming.

Repeated cutting of the plant is required throughout the growing season (April to June) and before the seed pods have ripened. 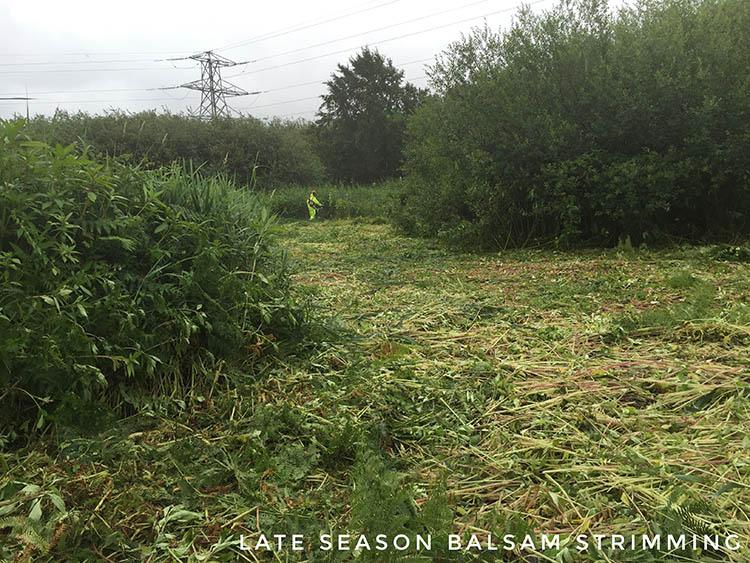 Depending on ground conditions and access, we can use our skid steer mounted mower or pedestrian flail for large areas or brushcutter for more difficult terrain and isolated infestations.

If protected species are present such as water vole, otter or great crested newts for example, our qualified in-house ecologists can advise of available options to ensure no detriment is caused during the control works.

Why is Himalayan Balsam a problem?

Himalayan balsam is listed on Schedule 9 of the Wildlife and Countryside Act 1981 (as amended), under which it is an offence to plant or otherwise cause the species to grow in the wild.

Himalayan balsam is a non native invasive species. It is often associated with damp fringe habitats such as river banks and ditch margins. Whilst it boasts an attractive flower, the plant itself can grow to heights of 2m, completely shading out all other plants beneath it, to the extent that very quickly, no other plants can survive once Himalayan balsam has taken over.

Himalayan balsam is spread by seed. Its seed pods are explosive when brushed past, catapulting seed for up to 7m from the parent plant. Seeds remain viable in the soil for up to two years. Which is why we expertly recommend your Himalayan balsam control strategy should be implemented for a minimum for two years. We advise monitoring of the treatment area in the third year, with options to remedy any residual late germinating plants.

Himalayan balsam is an annual plant, meaning it completes its whole lifecycle in one year. The negative impact if this is that given all other plants underneath it have died off from over shading, during the winter months the ground is often left bare. Bare ground close to watercourses where the Himalayan balsam is most often found, is prone to flooding and erosion. Without plants and plant roots to stabilise the soil, land loss and sediment pollution result. The soil that is washed away contains the seeds with two year validity, resulting in allowing the species to grow in the wild downstream of your site.

As Contract Ecology Ltd is a conservation led organisation, we always go that little bit extra when it comes to environmental best practice. We always deploy temporary trash screens to catch loose debris during balsam control processes to minimise risk of spreading the plant and our in-house ecologists are always on hand to advise if ecological conflicts are identified, even at the last minute.